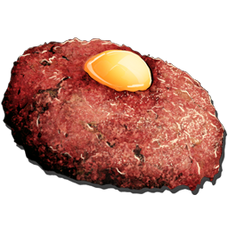 Battle Tartare is a dish in ARK: Survival Evolved. It can be created at a

This dish grants you various buffs useful in combat. Consume it to gain an additional +60% increase in melee damage, +50% movement speed, 15% damage resistance, and increased stamina regeneration. Also causes you to consume food and water 50% faster. The effects last for 180 seconds, during which you will lose 0.45 hp per second; for a total loss of 81 hp. The food spoils in 5 hours.

Be sure to include a Waterskin, Water Jar or Canteen with at least 25% water in the Cooking Pot.