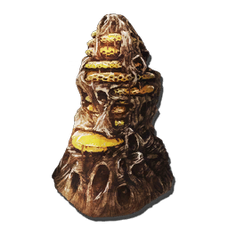 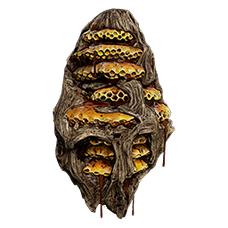 The Bee Hive is a structure used to produce

in the Primitive Plus DLC.

A Bee Hive can be obtained by taming a

Giant Bee. Once tamed, you can pick up the Giant Bee to turn it into a Bee Hive in your inventory. You can then place the Bee Hive on the ground. By demolishing a placed hive, it will turn back into a

On ARK: Survival Evolved Mobile, the Bee Hive is available as an unlockable Engram, due to the fact that

Giant Bees do not exist in the Mobile game. This Bee Hive can be attached to redwood trees in a similar manner to

On Primitive Plus DLC the

Giant Bee can be tamed and the Bee Hive can be placed but currently (since at least 2019) cannot be accessed.

The Bee Hive can generate

Giant Bee Honey over time. To obtain this honey the player can wear a full

Bug Repellant as the bees will sting players regardless of who placed the hive.

Chibi-Pets will also make bees sting even with full Ghillie. This effect can washed away by diving into deep water.

The Bee Hive can only be placed on ground, rafts, platforms and platform saddle.

Giant Bee Queen can be tamed, the Bee Hive first needs to be destroyed. The Bee Hive has 5,000

To do so, the Player can for example use a

Dimorphodon and order it to attack the Hive, the Bees won't be able to hit the

Dimorphodon and it can kill the Hive. The Player can also use a ranged weapon like the

Crossbow. A melee weapon is not recommended because the Bee Hives are usually located on walls (or massive Redwood trees) the Player cannot reach unless mounted on a flying or wall climbing mount like the

Quetzal however, might work if the Quetzal has a platform saddle. Note that the bees will likely attack the quetzal so it will fight back if not on passive. (usually resulting in making lots of spins trying to hit the bees and not succeeding, which can cause it to get stuck in the air.) This also happens to fliers with big turn circles.

A tamed Arthropluera's spit can be used to break the hive from a long distance, requiring decent aim but protecting the player from bee aggro and conserving resources. A spyglass can be used to check the hive's HP and confirm hits.

Using a mount is not recommended because the Giant Bees will dismount the Player from the mount. However, a good mount for destroying it is a

Pteranodon, using the spin attack you can damage the hive and still fly away without being attacked, other flying mounts can be used as well. It is recommended to keep distance from the Hive, because the Giant Bees will swarm out when the Player comes too close and will attack. If the Player has a certain distance from the Bee Hive, the Giant Bees won't appear and will not attack the player. A flying tame that the Player can carry on their shoulder is also recommended, because they will take out the Giant Bees attacking the player if the tame is set on any other Aggression Level than Passive. A tame with a big "bite" radius will also help clear out the bees around the player if necessary, e.g. the

Note that the Bee Drones can be lethal, even when wearing full

Flak Armor but usually not while wearing

Riot Armor. (Requires testing), they will also dismount the player from any mount when stung, except Dire Bears. This also includes all flying mounts, so the Player can be kicked off of their Mount while flying, likely inflicting fall damage, combined with the Drones attacking, resulting in their death and their mount's death, if left on passive.

Note that if the Player walks away from the Bee Hive the Hive will regenerate its health back instantly, therefore losing all progress, except when the Bee Hive is being attacked/damaged by, e.g. a tame. This effect can be prevented by other players too, but not with tames standing near it, unlike players.

Bee Hive destroyed in Aberration map currently does not respawn Giant Bee back as foreign dino are disabled by default. It is imperative that the hive is to be kept alive at all costs due to this bug as you will not be able get it back once its destroyed.

Drones can't seem to hit players if they go prone.