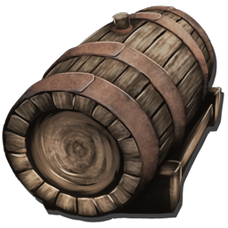 The Beer Barrel is used for creating

The Beer Barrel can be fueled with either water from a water container or pipes from an intake. After placing 40

Thatch and 50 of any regular

Beer Liquid will be created per six hours (one hour with singleplayer settings enabled).

Beer Jar, which can be moved to a players inventory and consumed like a normal water jar.

The Beer Barrel is not currently paint-able, however this object may be re-mapped to include paint regions in a future update.

Quick tutorial on how to make beer.