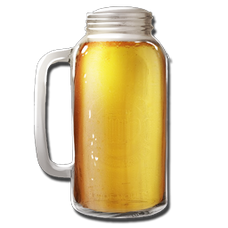 The Beer Jar is a consumable in ARK: Survival Evolved which provides temporary buffs at the cost of a later hangover.

It can be obtained from an Irrigated

Thatch and 50 of any

Beer Liquid. The Beer Jar is created when the Beer Liquid is combined with a

Water Jar in the Beer Barrel.

To drink from the Beer Jar, highlight it in your inventory and select Use Item, or put it on your hot bar and press the designated key. Your character will become 'intoxicated' for 2 minutes shown by a beer jar symbol and countdown, giving you increased insulation and damage resistance,melee damage(40%) and reduced

Water consumption (No longer works on tames), but will rapidly deplete your

Stamina. After 2 minutes, your character will be in 'hangover' state for 1 minute, keeping your stamina at 0 and preventing the effects of any Stews.

After drinking you are unable to run if stamina is not upgraded so therefore the only real use is in PvP fights because you can drink it to kill your enemy then flee before the debuff starts.

Beer can only be consumed once every 5 minutes.

They are also used to tame

Quick tutorial on how to make beer.