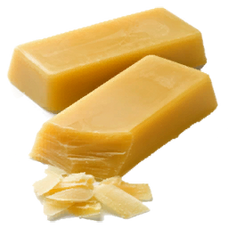 The Beeswax is a Resource in the Primitive+-DLC of ARK: Survival Evolved. It is produced in a

Beeswax is used to craft the following items:

After 258.0 patch, on May 30, 2017, apiary has been removed. Beeswax needs to be hunted down from the giant beehives (by breaking them open) found primarily in the Redwoods biome.

On PS4 it's a known bug that it is unobtainable on many unofficial servers. Some people may have the same bug on XB1 also.