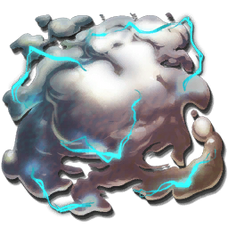 Bio Toxin is a resource in ARK: Survival Evolved. It can be harvested from

Cnidaria and Spore-inducing Mushrooms (Aberration Only)

At level 96, Bio Toxin can be used to craft

Toxicant Arrows (Mobile only), which are twice as potent as regular Tranquilizer Darts.

It can also be force fed to unconscious creatures instead of Narcoberries/Narcotics. It applies 80 torpor over 16 seconds, making them significantly more effective per item for any situation, except for its quicker spoil time.

Can also be used to passively tame Electrophorus.

There are no naturally-spawning resources for Bio Toxin on Scorched Earth. Because it is perishable (along with Shocking Tranquilizer Darts), it cannot be imported on official servers, restricting you to the less-effective Tranquilizer Dart.

Bio Toxin is abundant in Aberration and can be obtained from the Cnidaria in the lakes in the bio-luminescent (blue) zone as well as by harvesting Spore-inducing Mushrooms.

Bio Toxin can be harvested as normal from Cnidaria in Ragnarok's surrounding ocean. However because Cnidaria do not float at or near the surface in Ragnarok, tactics using flyers and rafts are less useful.

There are no naturally-spawning resources for Bio Toxin on Extinction, and cannot be made by a Gacha.

Bio Toxin can be obtained from Cnidaria in The Ocean biome, and from Poisonous Trees in the Toxic Mire area of The Bog biome.