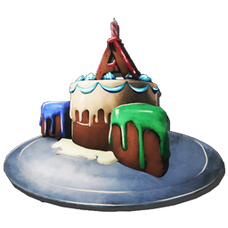 The Birthday Cake is a Birthday item. It appears only during the ARK: Awesome Anniversary event.

It can be placed only on a

Table. It has two actions:

The candle is now blown out. You can hear the well known Happy Birthday song, see some kind of indoor firework and a text:

You will also get one of these items:

Broth of Enlightenment for 1200 seconds.