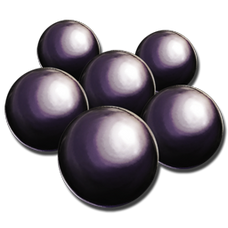 Black Pearls are a resource in ARK: Survival Evolved. They can be obtained by harvesting dead

Alpha Mosasaur. They can also drop as rare loot when catching fish with a

Gachas can also produce many items as well as black pearls depending on the gacha. The

Phoenix will also rarely poop them out instead of its usual

Black Pearls are used in crafting and are a key component in Tek Tier crafting recipes.

Eurypterid. They have no knockback and don’t gain any

Torpidity, which the Eurypterids can massively inflict. This allows you to attack and kill them effortlessly. Be wary however, the eurypterid also rapidly drains the stamina of tamed dinos and will leave you vulnerable to the other terrors of the deep.

Otters have an ability to rarely collect Black Pearls from fish corpses.

Grappling Hook and then use a fast water mount to drag it to the shore, where it can be harvested by a

An End-Game way is making use of a

Megalodon, equipped with the

Megalodon Tek Saddle, it can kill a

Tusoteuthis with the element pulses. When killed, the Megalodon can harvest the Black Pearls very easy. (Also works with / on

Mosasaurus, but harvesting with Megalodon gives more Black Pearls, and the Mosasaur is harder to kill.)

Beelzebufo do increased damage against

Eurypterid and also gather black pearls at an increased rate.

Eurypterid only drops a few pearls, an

The following creatures reduce the weight of Black Pearl by the listed amount while it is in their inventory:

In space Black Pearls can be found in large amounts if flying islands have giant pearls attached to it.

Also can be found from harvesting inactive carnivorous plant species.

Silica Pearls, can be found in Ragnarok. These can be harvested for 5-20 black pearls. Black Pearl collection from said clams now scales with the Harvest Amount setting of your server.

Black Pearls are dropped by Deathworms and Alpha Deathworms in the desert.

Silica Pearls, can be found near the rivers at Graves of the Lost. These can be harvested for 5-20 black pearls, but can be dangerous due to radiation and nearby threats (such as

Rock Drake and any aggressive dino dropped from above).

In Extinction, Black Pearls can be produced by

Gacha. This allows one to easily acquire large amounts of Black Pearls by feeding

Stone and other resources to a Gacha. Using the Gacha is the best way to get black pearls.

Black Pearls are also dropped by large corrupted carnivores such as

Corrupted Giganotosaurus in the north. These creatures have a small chance of dropping 1-7 black pearls.

Silica Pearls, can be found in the Crystal Isles. They can be located in the water bubbles in the Eldritch Isle. These can be harvested for 5-20 black pearls. Black Pearl collection from said clams now scales with the Harvest Amount setting of your server.

Silica Pearls, can be found in Valguero. These can be harvested for black pearls.

Black Pearl is used to craft the following items:

Black Pearls are the preferred, but not exclusive, food of Tusoteuthis.

Below are all of the black pearl locations for Ragnarok. For a larger map including the other resources, see the Strategic Resource Map.

Below are all of the black pearl locations for Aberration. For a larger map including the other resources, see the Strategic Resource Map.