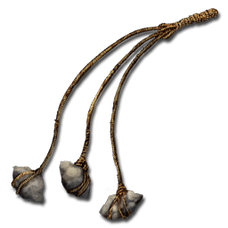 The Bola is a primitive weapon used to immobilize small or medium sized creatures. It can be thrown and when it hits a target, it wraps around their feet or body and entangles them.

The Bola roots humans in place for 25 seconds and wild dinos for 30 seconds. You have to wait another 10 seconds before you can apply a new bola to your target. The player or dino rooted will be incapable of moving, but can still fire guns, shoot arrows or attack. The player can also still jump, but will not be able to move. Players can struggle out of a bola by switching to just their fists and pressing the fire button which by default is the left mouse button, this reduces the remaining duration of the bola by one second per each attempt.

Dinos cannot be mounted while affected by the bola. It also cannot be recovered once thrown, although the affected dino can be manually freed of the bola before the effect wears off. Bolaing the dino a player is riding will dismount the player.

Bola does 0 damage, which will aggro wild creatures if hit.