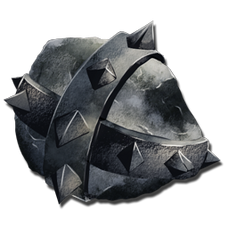 The Boulder is a refined rock that is used with the

Catapult Turret to cause large damage from a distance.

Boulders are crafted within the Catapult Turret itself, not requiring any engram to do so. Once crafted, they can be freely removed for storage or for transfer to other turrets. For now, the Catapult is the only turret type capable of launching a Boulder.

Tactically, the Boulder has numerous advantages over the Spear Bolt fired from a Ballista Turret. First, it is substantially cheaper, offering a fast and easy way to destroy structures from range. Second, it has a pronounced projectile arc, allowing the operator to lob it over walls to damage targets behind them. As a downside, the catapults are much more difficult to aim, are always expended on use, and deal less sustained DPS.

While the Spear Bolt excels in the accurate direct-fire role, Boulders make for great long-range anti-structure support artillery, due to their arcing fire and cheap ammunition. It is usually best to have a friend to help you to 'sight' the catapult. Should your shots land short or long, adjust your firing angle higher or lower to compensate.