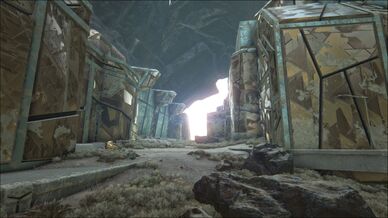 The Bracken Institution is a region in the Extinction DLC.

It's a Tek ruin on the top of the Mt. Bracken. The entrance is at (37.6/89.7), after having followed the slopes from the Water Main, southern east from the Snow Dome.

You can build everywhere but beware of the very close boundaries.

No creature seems to spawn here, but some can come from the Mt. Bracken just underneath.