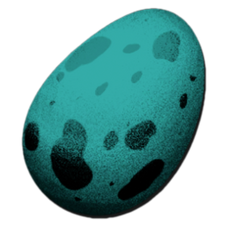 The Bronto Egg is one of the Eggs in ARK: Survival Evolved.

Bronto Eggs are randomly dropped by

Brontos. They can be eaten or used to make

Kibble (Bronto Egg) for taming a

Brontos mate, the resulting egg can be hatched into a baby

Brontos will cause them to become hostile and attack the survivor.

Bronto needs between 18h and 2d before having the capacity to lay eggs again. The incubation time can be reduced by up to 20% if the egg is placed in an

Retrieving a wild Bronto Egg on foot is extremely dangerous. The Bronto's tail whips are heavily damaging, and are able to fling the player several meters. We recommend using an oviraptor for such a job. Enduring such attacks can result in an untimely death, and they can run over the player as well. An aerial mount such as a Pteranodon can quickly get out of range of an aggressive Bronto (make sure your mount has the weight capacity to carry the one of the largest eggs currently in game). An aquatic mount can also provide a quick escape if available. Land mounts with some kind of speed (Carno, Raptor, Pachy, etc.) or a savvy player with a clear path can usually outrun a Bronto if no other option is available.

Herbivore Pheromone applied has laid one. They will hatch quicker than normal Bronto Eggs and the baby

Bronto will have better stats when it has hatched.

Super Kibble (Bronto Egg), which will