This article is about Camera, not to be confused with 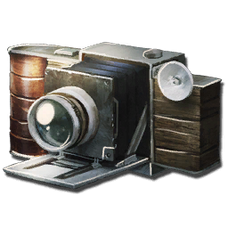 The Camera is a tool in ARK: Survival Evolved. It can be used to take pictures.

The Camera can be crafted at the Smithy.

Photos taken can be used when painting a canvas by using "Load Paints From This Type".

) before taking a picture.