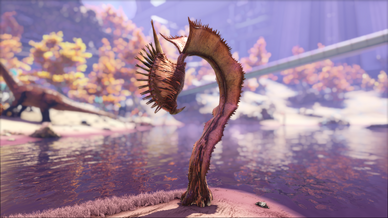 The Carniflora (CAR-nee-floor-uh) is an aggressive plant predator in Genesis: Part 2 that grabs onto anything small enough that gets near it. It cannot be grown by the player.

Anything it grabs will instantly be killed, but it seems to have difficulty trying to devour the

Human as it has shown a large amount of resistance, instead inflicting torpor after spitting it out.

The following can be grabbed (and instantly killed):

Moreover, it can't seem to grab the survivor if they are on a specific dino or vehicle (although it will attempt to if brought too close). The following dino or creatures/vehicles confer them immunity towards Carniflora:

Below are all of the Carniflora locations for Genesis: Part 2. For a larger map including the other resources, see the Strategic Resource Map.

While it is impervious to most damage, anything that causes fire will harm it.

These creature and/or weapon are capable of harming Carniflora: