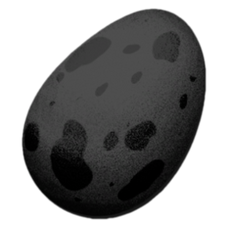 The Carno Egg is one of the Eggs in ARK: Survival Evolved.

Carno Eggs are randomly dropped by

Carnos. They can be eaten or used to make

Carnos mate, the resulting egg can be hatched into a baby

Carnos will cause them to become hostile and attack the survivor.

Carno needs between 18h and 2d before having the capacity to lay eggs again. The incubation time can be reduced by up to 20% if the egg is placed in an

Obtaining a wild Carno Egg can be rather difficult without preparation. A Carno is swift enough that a player on foot will have trouble escaping, and is strong enough to overpower most players as well. A Carno can also headbutt players and send them backwards a few meters, potentially off of a cliff or ledge. Because of these abilities, fleeing seems to be a wise option. An aerial mount is an excellent choice since they can quickly get out of range of a Carno. An aquatic mount is also a good choice since Carnos are poor swimmers, but is less versatile since Carnos tend to be further inland. Land-based mounts come down to what is faster than a Carno. A Raptor is a good choice, since they sprint very quickly and can jump. Sabertooths are similar in this regard.

If fleeing is not an option, then a player on flat ground with armor and an excellent melee weapon or a lot of firepower has a decent chance against low-to-moderate level Carnos, since they don't have a very high amount of health. If engaging a Carno on foot, then some backup will be extremely helpful, as the headbutt ability doesn't fling most other creatures as far as it does players. A couple of high level Raptors or creatures similar to that size can provide a distraction and help deal quick damage. If a player is fortunate enough to have a Rex or Spino available, then their mount can outright kill a Carno, especially with backup.

Carnivore Pheromone applied has laid one. They will hatch quicker than normal Carno Eggs and the baby

Carno will have better stats when it has hatched.

Super Kibble (Carno Egg), which will