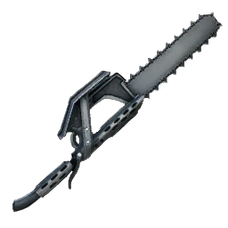 The chainsaw is used to obtain resources such as chitin, wood, and hide in higher quantities. It runs on

Gasoline. It shows the current amount of gas in the weapon as a percentage with the number next to it the amount of gas in your inventory. Additionally, the chainsaw is very effective at harvesting oil, scrap metal, electronics, and element dust from slain Enforcers and Tek Dinos.