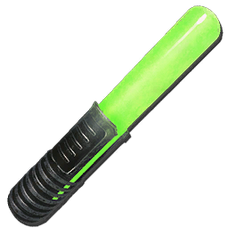 The Charge Battery is an item introduced in the Aberration DLC. Charge Batteries filled with Charge Light can be used as a source of electricity for powering electrical devices.

Any electrical device can be powered by putting a charged Charge Battery into its inventory and turning it on. One Charge Battery can hold up to 500 units of Charge Light.

Charge Batteries are used to power the following tools:

You can use a transmitter to transfer the batteries off world to another server that doesn't have the chargers.

With Tek Stryder you can:

Charge Light can be transferred between two batteries by dragging one battery over another. The latter battery will then absorb the charge from the first one.