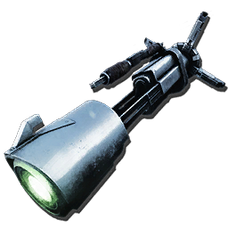 The Charge Lantern is a weapon in the Aberration DLC of ARK: Survival Evolved.

Charge Batteries as ammunition. It utilizes Charge Light to fire electrical voltage at the desired target. Most creatures are unfazed/unhurt by the weapon's light, however, it is especially useful against the

When the Charge Lantern is thrown by pressing alt-fire, it is placed down and acts as a light source in form of a spotlight. When used in this way, it deters the above mentioned creatures.

Depending on the intensity, lanterns go through energy at different rates. Note that these times assume the server runs with zero rollbacks: for practical purposes, the real world times will be a bit longer.