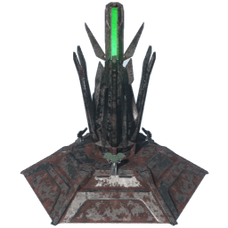 The Charge Node is a structure found around certain points of the Aberration map.

It can be used for manufacturing

Element. It also serves as a source of Charge Light,

Charge Batteries can be charged by placing them into the Charge Node inventory. A way to keep from 'breaking' a charge station, and put it into a "hard restart" is to put in ten batteries that are not fully drained. This will ensure that the station may hit 0, but it will not roll over into being completely drained. This will bypass the reset entirely, and it will simply recharge itself. Charge Batteries take 3 minutes and 20 seconds to charge fully.

Note that crafting Elements, or charging too many batteries, will put the station into "Overcharge" and will drop the Charge station offline for 2 minutes, and into recharge for 33 minutes and 30 seconds. During this time, it will not emit Charge Light, buff against

Below are all of the Charge locations for Aberration. For a larger map including the other resources, see the Strategic Resource Map.