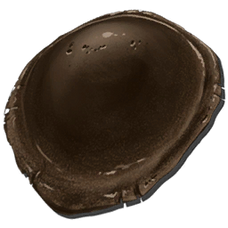 Chitin (Ky-tin) is a resource in ARK: Survival Evolved. It's a polymer and characteristic component of exoskeletons, radulae, beaks, shells and various other physical structures in organisms throughout history.

Chitin can be acquired by harvesting corpses with most tools and dinosaurs.

Therizinosaur (headbutt with delicate collection leveled up) with high melee damage. A tamed

Diplocaulus can also be used to gather Chitin by killing

Trilobites. Another highly efficient tool for harvesting it is the

Metal Hatchet with the metal pike yielding similar efficiency. The pike holds the advantage of more precise hits against small chitin-droppers like

Meganeuras. Chitin can be harvested with a

Picks as well; other low level items will only occasionally harvest Chitin.

Direwolf skilled on melee damage. A

Sabertooth will gather just as efficiently but has lower base damage. This method can grant up to 500 Chitin in 10 minutes. Another good way to farm Chitin is to kill

Titanomyrmas at the beach and surrounding areas, harvesting them with a

Sabertooth. If you are in a forest or swamp, you can also kill a random dinosaur and leave the corpse. Often a swarm of

Meganeura will come to the corpse, and you can kill them all at once to gather chitin. Farming

Karkinos on Valguero or Aberration can be an effective way of gathering large amounts of Chitin, so long as you have a strong enough tame.

Another way to farm Chitin is to kill a creature, and let the corpse rot without harvesting it. In some regions, this will attract insects. Using a

Beelzebufo to kill/harvest the insects will not only result in a much more Chitin, but your frog will also directly produce a sizable amount of cementing paste as well.

Additionally, in Crystal Isles, Chitin can be harvested from Anthills in large quantities, as well as from the

Dung Beetles that spawn around them.

The following creatures reduce the weight of Chitin by the listed amount while it is in their inventory:

Chitin drops from the following creatures:

Chitin can be used to craft the following items:

Chitin can also be used as an alternative to

Keratin to craft the following items: