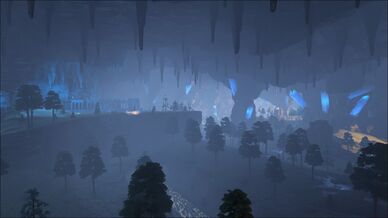 The Cliffside Cavern is a feature in the DLC: The Center.

Like the Underground World, the Cliffside Cavern is a self-sustaining ecosystem with many of the amenities of the overworld. The cavern itself is underneath the Snowy Grasslands and lies within the cliffs of the Edge of the World. One would be taken aback by its lush forests, diverse wildlife, and cascading waterways. Light is provided by gargantuan blue crystals along the ceiling, and a wintry ice palace serves as the cavern's most notable feature. The ice palace itself is home to numerous

Kairuku and serves as a consistent source of

Artifact of the Cunning can be found there as well. There are multiple metal nodes on either end of the ice palace, along with numerous deposits of pearls in the pond to the southwest.

To get the Artifact, simply travel to the Cliffside Cavern and then walk or fly to the Ice Palace at the center. The artifact is located in the middle of a small river in the center of the palace. It is perhaps one of the easiest artifacts to obtain.

While excellent to build in, survivors should note that the entirety of the Cliffside Cavern is considered a normal "Cave" by the game. This means on PVP servers, structures built here will take 6x the damage they otherwise would. Structures take normal damage (tested in Single player and Official Server). This area is an excellent base location for tribes due to the lack of aggressive creatures and abundance of space, along with proximity to resource deposits. Keep in mind that on official servers (post flyer nerf v.256.3) the extreme vertical distance can make traveling to other areas of the map somewhat tedious.