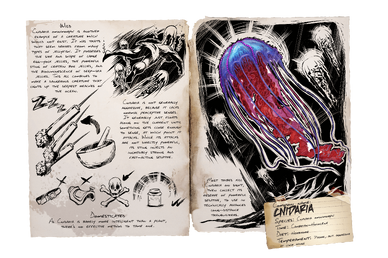 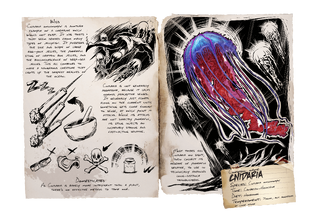 None
Drag Weight
21
Carryable By
Can Damage 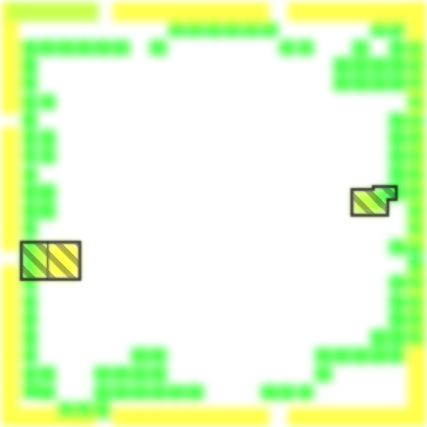 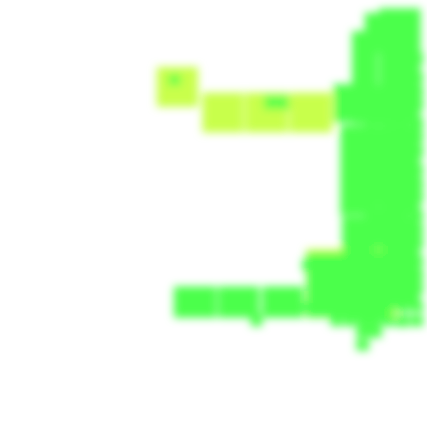 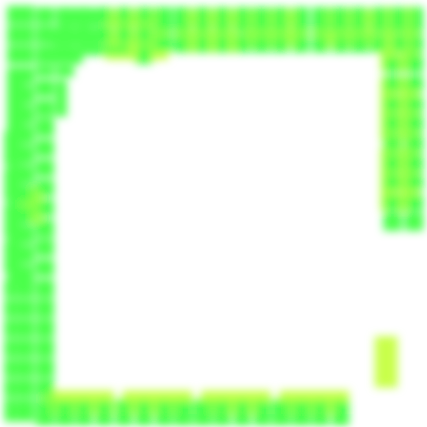 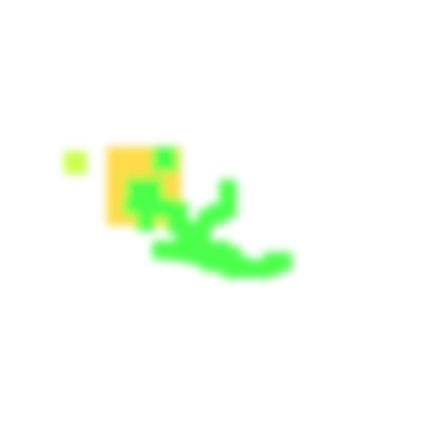 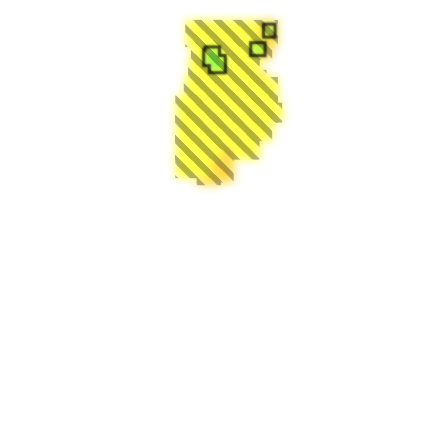 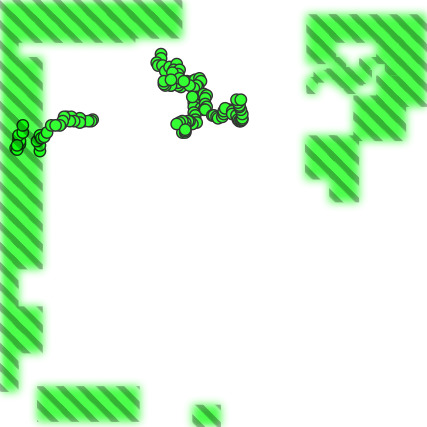 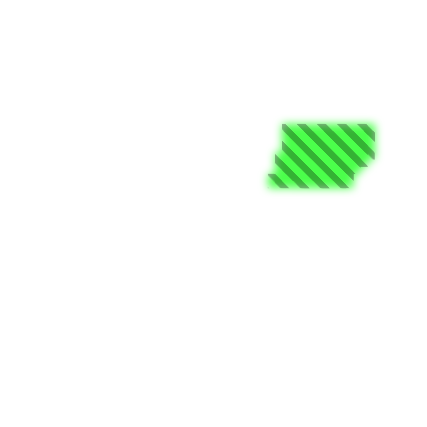 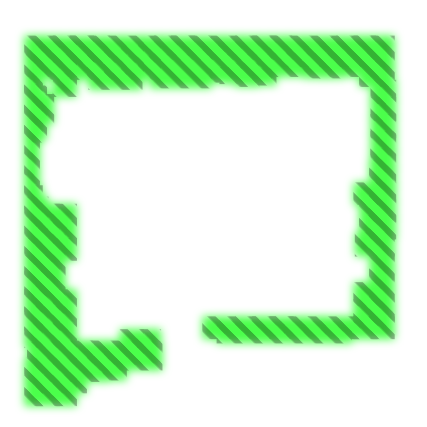 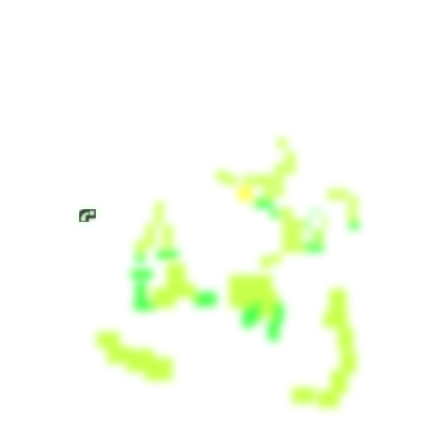 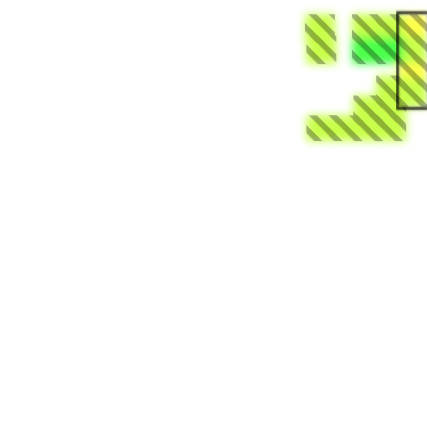 The Cnidaria (Nye-dare-e-ah) is one of the Creatures in ARK: Survival Evolved.

Passive, but aggressive at close range

Cnidaria omnimorph is another example of a creature which should not exist. It has traits that seem derived from many types of jellyfish. It possesses the size and shape of large egg-yolk jellies, the powerful sting of certain box jellies, and the bioluminescence of deep-sea jellies. This all combines to make a dangerous creature that lights up the deepest reaches of the ocean. Cnidaria is not generally aggressive, because it lacks normal perceptive senses. It generally just floats along on the current until something gets close enough to sense, at which point it attacks. While its attacks are not directly powerful, its sting injects an incredibly strong and fast-acting sedative.

As Cnidaria is barely more intelligent than a plant, there's no effective method to tame one. Most tribes kill Cnidaria on sight, then collect its reserve of powerful sedative, to use in technically advanced long-distance tranquilizers.

Although they seem to be primarily herbivores, feeding off algae, they seem to have another favorite target: humans, and the occasional tame we bring along with. The Cnidaria may be an herbivore but this makes them act very predatory, pursuing survivors at a slow pace, but a shockingly large aggressive range, especially for a creature that’s not supposed to have any sensory organs or even a brain. Its attacks include torpor inducing stings and knocking riders off of their mounts. Do not underestimate this creature, as they can cripple almost anything, including apex predators such as Giganotosaurus and Mosasaurus, leaving them helpless as they slowly feed on them. However if one can avoid the crippling effect, it has low health and can be killed easily by players of any level. This makes the Cnidaria a common, deadly aquatic pest. They can be found alone but are most often found floating around in groups of two to seven. Wild Cnidarias do not take damage from nor show aggression towards any other fully aquatic animals unless caught in the middle of a fight between other creatures. They will react defensively if attacked by terrestrial or semi-aquatic ones.

Cnidaria Omnimorph is a relatively large jellyfish compared to a human, with long trailing tentacles packed with venom to sedate both prey and predators. They are typically easy to spot at night and in deeper waters, as they glow a bright neon cyan color, but blend in during daylight near the surface, as they’re similar in color to the water. As they are translucent, they do not cast shadows.

The Cnidaria always spawns with the same color scheme and has no color regions.

This means it is currently impossible to make alterations to the Cnidaria's colors.

This section describes how to fight against the Cnidaria.

Cnidaria are aggressive but have a smaller aggro radius than other aquatic predators and are very slow. The easiest way to deal with them is to just swim around them or kill them with ranged weaponry.

Do not engage the Cnidaria in a melee fight. It only takes a single Cnidaria to stunlock your mount and force you off of it, and the stunned creature effectively can't do anything while the Cnidaria slowly chips it down. Their stun attack makes it nearly impossible to defeat one with a melee weapon, as you are effectively stuck in their attack while they either chip away at your health or drown you. On mobile, the Doedicurus does not get stunned by their attacks, but be aware, as it still takes damage.

Be wary of Cnidaria camouflaged into the walls of underwater caves.

It’s best to stay out of their deadly attack, and fire at them with a bow or gun. Use their low speed to your advantage, and make sure to swim away before they get too close. SCUBA Flippers are fantastic for this purpose.

Alternatively, you can use a

Basilosaurus to kill them without any risk, because the Basilosaurus is immune to stuns. Neither you nor your mount will be stunned or damaged, and you will not be forced off your mount. In the underwater caves, they are considered the safest option for clearing out predators because Cnidaria in caves are significantly stronger than ones in the open ocean.

Using a Crossbow from a raft or mount will work. If you don't have either of those, or don't want to use them, you can lure them to the shore and safely attack them from land.

Tusoteuthis can make for an effective hunter of Cnidaria due to its resistance to dismounts and large attack range.

Auto Turrets do not target Cnidaria.

They are very slow and have low health and attack range.

For information pertaining specifically to the real-world Cnidaria, see the relevant Wikipedia article.