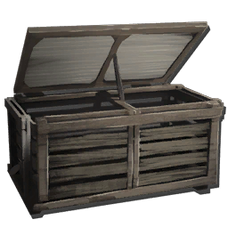 The Compost Bin is a Farming structure designed to create

To begin the process, open the Compost Bin's Inventory screen. Add 50 pieces of Thatch along with 3 pieces of Feces of any size. Feces do not need to be same size. After sitting in the Compost Bin for about 1 1/2 in-game days or roughly 50 minutes, the items will be removed and replaced with Fertilizer.

Converting Feces to Fertilizer will always result in more fertilization than the three Feces would have granted combined, except when using

Massive Animal Feces. Because any three Feces produces the same amount of Fertilizer, it is ideal to use smaller Feces in the Compost Bin to produce Fertilizer while using larger Feces directly in

A Phiomia can be used to produce

Medium Animal Feces in large quantities by force feeding it

The Compost Bin is not currently paint-able, however this object may be re-mapped to include paint regions in a future update.