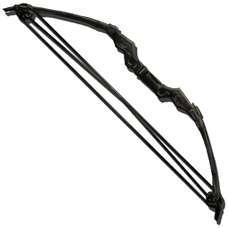 The Compound Bow in ARK: Survival Evolved is an advanced bow and the only bow able to fire armor-piercing

Metal Arrow. When firing anything other than the metal arrows however, the Compound Bow actually deals less damage than a

Crossbow. Since torpor gain from

Tranquilizer Arrow scales with damage, it is less efficient for taming as well.

The armor piercing ability of metal arrows does not appear to negate some damage reductions, such as wild Rock Elemental.[1] A notable damage reduction it can negate is on titans, making them able to deal 3.3x damage to them.

Unlike the wooden pull-back Bow, the Compound Bow has an actual sight which is brought into focus by the alt-fire button. The sight is only marginally useful because the ARK compound bow suffers from the same screen shake used for the wooden bow.