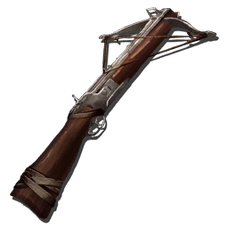 The Crossbow is an advanced hunting tool. It is the upgraded version of the

Bow. Every shot from the Crossbow is fully charged and deals more damage, but takes slightly longer to reload than the Bow. It is not as efficient as a Longneck Rifle with Tranquilizer Darts for increasing a creature's Torpor, at least in terms of Torpor per Damage (TPD), but deals higher Torpor per Second (TPS) if successfully firing at its maximum firing rate of 0.383 RPS.

When loaded with Stone Arrows, the Crossbow can be used as a ranged weapon to hunt and kill other players or creatures.
When loaded with Tranq Arrows, it can be used to knock other players or creatures unconscious. Since the torpor delivered by a Tranq Arrow scales with damage, it raises the target's torpor by a higher amount than an arrow shot from the Bow.
Most creatures will take about 2.5 times as much damage if you shoot them in the head. Torpor gain from Tranquilizer Arrows does scale with this boost.

The Crossbow can also be fired underwater, making it an ideal choice for hunting or taming underwater creatures such as a Megalodon, Plesiosaur, Mosasaurus, or Dunkleosteus.