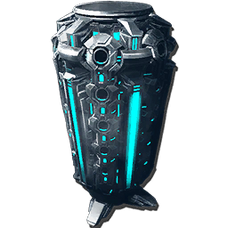 The Cryofridge is a structure in ARK: Survival Evolved. It stores and charges

When a Creature is Cryofrozen in a powered Cryofridge, the Creature will gain more passive XP, gaining approximately 75 XP per hour.

The Cryofridge is not currently paint-able, however this object may be re-mapped to include paint regions in a future update.