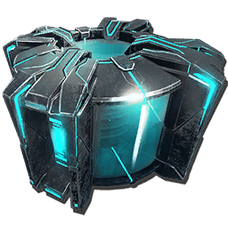 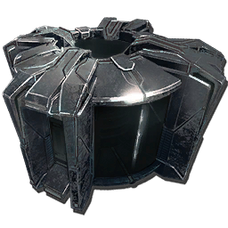 The Cryopod is an item to store your tames in, by freezing them into an "ice cube" state. Creatures stored in a cryopod do not count towards the tribe creature limit.

To capture a creature in a Cryopod, equip an empty Cryopod and while aiming close to them hold

for a few seconds. Once a creature is Cryopodded it will act like an item, halting food consumption, and the Cryopod can be carried in a survivor or creature's inventory which makes mass transport of creatures easier.

The Cryopod will begin to discharge as soon as it is created, either through crafting or after being obtained from an Orbital Supply Drop, with a 30 day or one month decay period. The

Tek Sleeping Pod will recharge the Cryopod as long as it is powered. If the Cryopod is not recharged before the charge reaches zero, it will disable and will be labelled as dead. When the Cryopod goes dead any creature inside the Cryopod will die and disappear forever, even after the Cryopod is recharged. The creature's death will be noted in the Tribe Log, and the dead Cryopod is unusable until it recharges in a

, but the discharge rate can be slowed to half rate by placing the Cryopod into a

With the use of Cryopod, players can:

When certain conditions are not met, attempting to release the dinosaur out into the open will result in the following red message, with the dino still inside the cryopod:

When a creature is un-Cryopodded, the survivor will receive a Status Effect known as Cryo Cooldown. Cryo Cooldown lasts for 5 minutes, and is tracked with a countdown timer in the bottom right of the screen. Any Creatures un-Cryopodded during Cryo Cooldown will get Cryo Sickness. Cryo Sickness lasts for 5 minutes, causes said creature to receive increased damage if attacked (10x normal damage), and renders the creature unconscious with a full bar of torpor. The words "Cryo Sickness" are displayed above any afflicted creature in red text for the full 5 minute duration. Creatures cannot be Cryopodded while Cryo Sickness is active, and even if the creature has a short torpor timer (like

There are a few things to note when Cryopodding a creature:

Note that the 'Giant Bee' refers to the bees spawned by

Giant Queen Bee, not the queen herself.

Only the Ice and Chalk Golem variant of Rock Elemental from Valguero are affected.