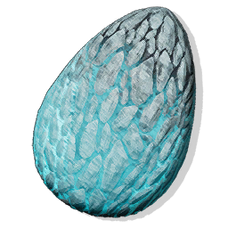 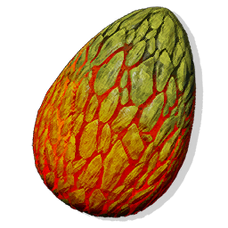 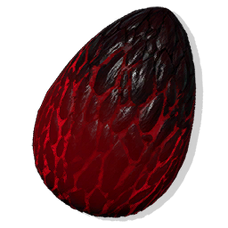 The Crystal Wyvern Egg is an Egg in the Expansion Map Crystal Isles.

Crystal Wyverns have mated. They can be eaten or used to make

Crystal Wyverns mate, the resulting egg can be hatched into a baby

Crystal Wyverns will cause them to become hostile and attack the survivor.

Crystal Wyvern needs between 18h and 2d before having the capacity to lay eggs again. The incubation time can be reduced by up to 20% if the egg is placed in an

On Crystal Isles, in the desert region, nests of tropical, ember and blood crystal wyverns can be discovered where fertilized eggs can be found. The nests are located on the plates around the Desert Wyvern Hive. All wyverns around the nest are aggressive towards the player if you get too close to them. By collecting the eggs, all wyverns become aggressive towards the gatherer. While Crystal Wyverns can be tamed or bred for eggs, this is another way of gathering the Wyverns.

However, unlike the wyverns found at Scorched Earth, Valguero and Ragnarok, the crystal wyverns that resides in this area are faster than their main counterpart, making it virtually impossible to outrun them.

Building a trap near the hive to either trap or kill nearby wild Wyverns can take off some of the pressure when getting an egg.

Oviraptors will, in fact, steal Wyvern eggs from nests when they are positioned close enough to do so, despite some sources claiming otherwise. (Tested working as of 306.89 on official servers) Consider using Nearest Follow settings to aid Oviraptor positioning. When the Oviraptor grabs the egg simply take it from Oviraptor. This avoids the penalty of angering every Wyvern in a huge radius as you technically did not steal the egg from the nest yourself according to the game. This is probably the safest method, but also probably the most labour intensive as taming even a low level Oviraptor can be outright impossible without already established egg production. Make sure you take the egg from the Oviraptor and do not carry it away while it is still holding the egg. This is reported to both erase the egg and break the Oviraptors ability to grab eggs in the future, likely related to the draw distance of the nest that the game may think the egg is still located at.

Crystal Wyvern, they are the easiest way of getting an egg, and the only flying mount capable of tanking at least their variant if flying away isn't an option.

If there is one tamed,

Crystal Wyverns' attacks. They can have decent health(around 1500) and enough weight to collect multiple eggs in one run.

Argentavis has good weight, making it capable of snagging the eggs, but escaping may be difficult due to its speed. It is advised to choose an egg that has as few as possible surrounding

Crystal Wyvern Heir. One could increase the health of their

Argentavis and try to tank their way out. Alternatively, by putting points into health, stamina and melee, it is possible to kill enough wyverns to escape. This is not recommended if there are many wyverns nearby, multiple alphas, or if you are using a low-level Argentavis.

Pteranodon is the fastest alternate flyer, although it is NOWHERE faster than wild

Crystal Wyverns and has low health. When escaping, try to fly low, through arches, around rocks, or any other maneuvering to put objects between you and the pursuing

Crystal Wyverns. They can sometimes get stuck on the rocks, putting more distance between you and them, and allowing more time to escape. If the

Alternatively, try lure the Heirs into a set trap designed for Pteranodon size to stop them.

Rock Elemental has decent health, ranged attack and immunity to wyverns' breath attacks, plus its natural melee damage reduction, wyverns are having headache to deal with this golem. Watch out for Poison Wyvern's projectile, it cannot damage the golem but the player sitting on it.

With its high base speed, dual passenger seat and skydive ability, the

With it's high speed, mobility and redirection the Bloodstalker can easily lead Crystal Wyverns away so you can turn back and get out of their agro radius to get eggs with little problems.

With it's ability to jump multiple times, dash long distances, and fit through tight spaces, the Managarmr is ideal for dashing in, grabbing an egg, and dashing out again. This only works with Crystal Wyverns however, as most wyvern trenches run the serious risk of death by lava.

Plant Species X can slow the wyverns down allowing you to escape (be careful when positioning as they will also target close wild creatures and can‘t attack the wyverns when distracted.

Using a bunch of

Velonasaurs on turret mode easily gets the trick done. 20 of them will kill them in seconds, though 10 will do fine if they are high level , healing won't be needed if they can't get hit, for example with a cage they can shoot from but stay out of range from wyvern breaths. Otherwise a

Daeodon will do fine. This is a more time consuming alternative to the turret idea seeing taming or breeding takes a lot of time. But at the same time, it doesn't cost any bullets, and meat for food is easy to come by. Expect some lag with the amount of particles flying compared to turrets.

If playing on a non dedicated server, survivors can abuse the tethering mechanic to get an egg. Have a player that is not the host grab an egg, then have the host player kill themselves and quickly respawn far away. This will force all non-host players to teleport to the host's location.

If not on Hardcore mode, players can cheat death(as they revive as many time as they are dead). You will eventually obtain an egg by following the steps below: