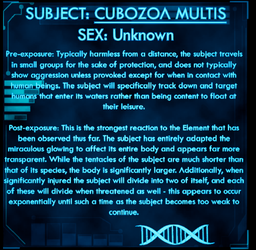 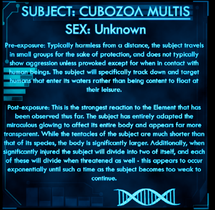 Not Yet Released
Variants

The Cubozoa Multis is one of the bosses in ARK: Survival Evolved Mobile.

The Cubozoa Multis always spawns with the same color scheme and has no color regions.

This means it is currently impossible to make alterations to the Cubozoa Multis's colors.

This section describes how to fight against the Cubozoa Multis.

Before entering the Arena, the survivor should make sure to have full

Compound Bow (which can be used underwater) is recommended for the fight, as most ranged Weaponry will not work underwater. 1-2 ×

SCUBA Armor is not needed as the survivor will not drown while in the Arena, but

Frog Feet make it easier to outswim the Cubozoa Multis. If you are feeling risky you can bring a

Pike and pike down the small versions as they are much easier to deal with.

Torpor, which can prove fatal due to the inability to consume

Stimulant during the fight.

The survivor is able to outswim the Cubozoa Multis, providing many opportunities to inflict damage on the Boss and good Armor will allow the survivor to tank much of the damage.