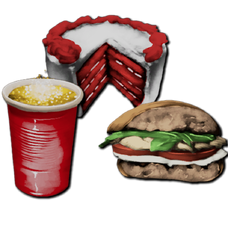 The Custom Consumable is a player-created, customizable dish in ARK: Survival Evolved.

The Custom Cooking System allows survivors to create their own consumable items with custom names and ingredients to provide different effects. In order to create a custom recipe, you must first place a

Custom recipes are most useful due to the fact that they both stack and have a standard spoil time of 48 hours. Keep in mind, however, depending on your crafting skill, custom recipes may not be as nutritious as the items used to create them, and can quickly become a cumbersome item to keep hold of. That being said, custom drinks are lighter and stack, unlike Water Jars and Canteens, and are often available earlier than either of those alternatives.

Place the finished recipe into a

Industrial Cooker with the required ingredients and light the fire to begin the cooking process. The speed at which the dish is created is directly related to the Crafting Skill used to create the recipe; that is higher Crafting Skills create dishes faster.

All drinks require a

Waterskin with at least 25% water; however, foods do not require water, unlike any

Focal Chili adds 100% to crafting skill, so if in use, simply add 1 to the crafting skill value or an extra 100% into the calculator.

The weight is equivalent to 0.1 + (0.2 * WeightOfAllIngredients)