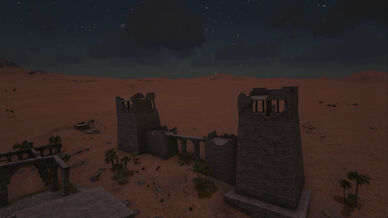 Arthropluera roam the lower areas in search of prey. The best way to survive the deathsands is to travel with either a fast flying mount, or a

Deathworm are among the most dangerous threats encountered on foot. Drops containing rare loot can be found periodically within the desert. If you spend too long in the Deathsands during daytime, your character will suffer from heat stroke that will slowly intensify over time. The Deathsands biome is useful for both its

Organic Polymer harvested from Mantis, and is one of the two ways to collect Deathworm Horns from Deathworms on the map.

The Deathsands is primarily composed of sand dunes. Few features of note exist, save for the few oasis that serve as rest stops for travellers. No water exists except for in these small havens of life. The bones of massive creatures litter this area, a testament to its inhospitability. To the west lies a ruined city, slowly being claimed by the desert.