This page discusses the installation and configuration of a dedicated ARK server.

Your OS must be a 64-bit OS (ShooterGameServer is a 64-bit executable and as such will not run on a 32-bit install of Ubuntu or Windows). The server has been tested on Ubuntu 14.04[1] and should also support any Windows host where the prerequisites found in _CommonRedist can be installed.

You can host multiple dedicated servers on the same host, however be aware that CPU and memory should be monitored carefully if they are busy servers rather than test servers. For example:

Microsoft Visual C++ 2013 Redistributable (can be found in the Steam Ark game folder under _CommonRedist/vcredist/folder).

DirectX (DXSETUP, can be found in the Steam Ark game folder under _CommonRedist/DirectX/June2010/ folder).

The game server requires glibc 2.14 or greater. Ubuntu 14.04 (and newer) and Debian 8 (Jessie) satisfy this requirement automatically, but older versions, such as Debian 7 (Wheezy), do not. To install the required version of glibc on a Debian 7 (Wheezy) host:

Note: This procedure does not upgrade the host to Debian Unstable (sid); only glibc itself and any packages it depends upon are updated.

For other older distributions that don't include glibc 2.14 or newer, refer to the distribution's documentation and support forums for guidance.

Note: This section doesn't apply if you'll be using systemd to launch the dedicated server (as described below in #Automatic Startup), as it can set this limit at runtime.

To ensure that the host's open files limit is high enough to support the game server:

Warning: Without these changes, the game server may not successfully launch. If the server appears to start, but uses a high amount of CPU time without using at least 5.5GB of RAM, it hasn't been able to open all the files it needs and the above change should be applied.

Tuned is a daemon that monitors the use of system components and dynamically tunes system settings, currently only on RHEL7, CentOS7.x and Fedora.

Note: You need to set tuned to „throughput-performance“. Otherwise all changes in /etc/security/limits.conf will ignored!

The dedicated server is available for both Linux and Windows platforms. For both platforms, SteamCMD is used to download the server files. Refer to that page for detailed instructions on its installation and usage; the instructions included in the steps below are deliberately concise for space considerations.

Warning: [Linux-specific | Windows: report missing] If you want to use a SSD to run the server, but your normal steam folder is on your main HDD, check the soft-links of the folders located in '.steam'

Sometimes events are not implemented in the main game but into a so called branch. To run this event you change to this branch.

Add -beta with the branch name to the app_update command, like

Additionally start the server with -branchname.

Of course change the branchname to whatever the name of the branch is. When the event is or should be finished, just remove the additions.

For your server to become visible in both the Ark server lists and the Steam lists, do the following:

For most Linux distros, if there is a firewall at all it will be iptables based. Most modern distributions will use a different interface, it's a good idea to use that instead of direct iptables commands.

This script will open the ports in a way that will persist across reboots. UFW is the firewall on Ubuntu

This script will open the ports in a way that will persist across reboots. FirewallD is the firewall on RHEL7, CentOS7.x and Fedora.

Keep in mind that this is only a temporary solution and should only be used if neither of the other scripts apply for your system. To make it safe for reboots see the documentation of your distribution, how to add firewall ports to the existing configuration files - or how to add scripts to the boot process.

There are many websites with tutorials on port forwarding. It is highly suggested you visit portforward.com, which offers tutorials for the majority of routers.

You must forward both TCP and UDP for your server to show up on any lists. You can make sure your ports are open by using the tool from portforward.com, that is, after you enter the ports that you have forwarded in the start_server.bat file you should have created earlier.

Finding Your Server in Lists

You can access your server via the Steam servers list or the Ark unofficial list. Just search for your name in the Ark list, or find your IP address in the Steam server list. It is best to add your servers IP:PORT to your Steam favorites and joining using the 'favorites' tab in game. The in game list has a limit on the servers it will show at one time. There is no guarantee your server will appear in the unofficial lists all the time.

You can configure a scheduled task to automatically run a batch file and start the dedicated server when the system boots.

Note: systemd is not available for Ubuntu 14.04.

As an alternative to using a script to launch the dedicated server manually, hosts running systemd can be configured to automatically start the dedicated server when the system boots. When using this method to manage the server, using GameUserSettings.ini to specify its settings is highly recommended. Refer to Admin Game Commands for more information.

After following these steps, your server should be up and running and be automatically managed by the host on startup and shutdown.

The server can be stopped by running:

and its current status can be viewed (whether it's running or not) by running:

Note: If you need to update the ark-dedicated.service file (to change the dedicated server's startup options or to adjust its path), run the following command to ensure your changes are applied:

To update the server when a new version is released, repeat the same SteamCMD commands shown in the previous section. Be sure to use the correct set of commands for your platform. Refer to SteamCMD's documentation for details on automating this process.

If you use the systemd startup file you can easily integrate the update-mechanism to be run before every start of the game.

While running the game, the command console can be accessed with either the [~] (tilde) or [TAB] keys (depending on game version, default configuration and your keyboard layout). Once in the console, to activate administrator commands, enter:

Refer to Admin Game Commands for a list of available commands.

If the console can't be opened in-game, exit the game, open the game's DefaultInput.ini file (located in your Steam library in the folder named steamapps\common\ARK\ShooterGame\Config) with a text editor and locate the line (near the bottom of the file) that reads:

Remove the semicolon (;), changing the line to read:

Save the file and launch the game. The console should be accessible.

To make a backup of the server data, simply copy the folder named ShooterGame/Saved (and his content) to the desired backup location. This folder contains all tribe, player and world data for the server. Performing a backup is recommended before updating a server to a new release.

If your server isn't retaining characters or world data when it's restarted, it may not have full access to the folder where it's installed.

The first time the server is run, it should create a folder named ShooterGame/Saved containing various configuration and save files. If the server has run at least once but hasn't created this folder, it may not have been able to create new folders and files there. Verify that the folder where the server is installed is readable and writable by the user account that actually runs the server. (For Windows servers, check the status of User Account Control)

The server software, by default, is set-up to automatically save world data every 15 minutes. If your server crashes before the first 15 minutes are up, you will not have any data saved.

This can occur when the server can't open all the files it needs due to an insufficient open files limit on the host. Refer to the Linux section above and follow the procedure to increase the host's open files limit.

You can also use this tool to manage your server when it is installed: https://steamcommunity.com/sharedfiles/filedetails/?id=468312476 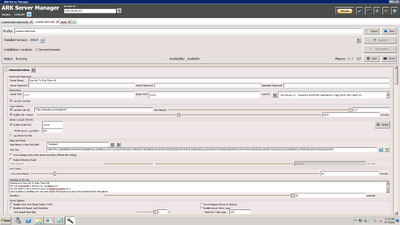 The Ark Server Manager is designed to help you set up and maintain your own Ark: Survival Evolved (tm) dedicated servers. It provides a simple user interface allowing you to create and edit server profiles containing all of the settings you need to customize the playing experience for you and your friends.

If you're planning to have players join from the EpicGames version of ARK you must have the -crossplay command line option set.