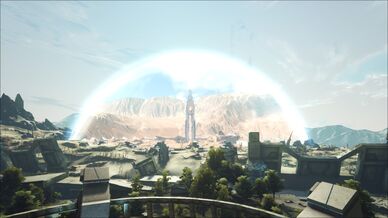 The Desert Dome is a region in the Extinction DLC.

The Desert Dome houses the Red Obelisk and the Desert Cave which leads to the Desert Titan Terminal. It is inhabited by Creatures originating on Scorched Earth, such as

Lymantria. The Dome can be extremely dangerous at times, as the threat of a

Velonasaur is always a possibility. Geysers can be found throughout the Dome. The Temperature is 15 °C or 59 °F to 25 °C or 77 °F so Food and Water is Needed.

The Desert Titan Arena is generated within the Desert Dome for fighting the Desert Titan. Upon Activation of the terminal within Desert Cave, all nearby Survivors and Creatures will be teleported back to the Arena while the

Desert Titan is being materialized. Once it is fully materialized, it will begin its onslaught.

There is a 6 hour timer between summoning another Desert Titan, which begins as soon as it is materialized. If the Desert Titan is still alive and tamed, the timer will still count down, but no other Desert Titan can be summoned until the existing one dies, even after the cooldown ends.

Uses these Commands to give yourself all the Items needed for tribute:

Use this Command to create a portal to go into the Arena: