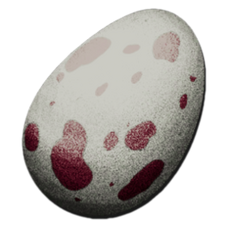 The Dilo Egg is one of the Eggs in ARK: Survival Evolved.

Dilo Eggs are randomly dropped by

Dilos. They can be eaten or used to make

Dilos mate, the resulting egg can be hatched into a baby

Dilos will cause them to become hostile and attack the survivor.

Dilo needs between 18h and 2d before having the capacity to lay eggs again. The incubation time can be reduced by up to 20% if the egg is placed in an

Tips: The only danger about stealing a Dilo egg is that they travel in packs of 4-5 and might have a mate-boost. So, a fast or powerful mount is recommended to either escape from them or kill them. A player on foot is not ideal unless the player has chitin armor or better with a long ranged weapon to avoid their poisonous spit.

Carnivore Pheromone applied has laid one. They will hatch quicker than normal Dilo Eggs and the baby

Dilophosaurus will have better stats when it has hatched.

Super Kibble (Dilo Egg), which will