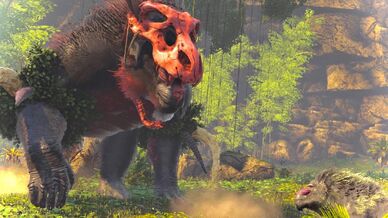 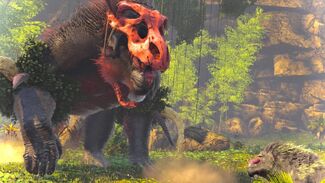 No
Data
XP for kill
12,000 XP
Drag Weight
1200
Habitat
The Dinopithecus King Arena, accessible via the Obelisks and Supply Crates.

The Dinopithecus King is a massive Dinopithecus that stands taller than even the likes of a Rex or Megapithecus. He wears a skull helmet reminiscent of the Rex Bone helmet skin with feathers protruding from the top. His forearms are braced with leaves, large claws, and Amargasaurus spikes, his true appearance highly resembles the Dinopithecus Art with blue hued face cheeks, red butt cheeks and a white skull helmet.

His appearance changes based on difficulty with his facial fur, cheeks and skull helmet being green on Gamma difficulty, Blue on Beta Difficulty and Red on Alpha Difficulty.

The Dinopithecus King always spawns with the same color scheme and has no color regions.

This means it is currently impossible to make alterations to the Dinopithecus King's colors.

This section describes how to fight against the Dinopithecus King.

After being teleported into the boss arena, head down the path, beach on your left, cliff face on your right. You'll quickly come to a short tunnel on your right which leads through the cliff face and into a circular clearing where the boss fight takes place.

The boss is down the far end. Make sure you bring your whole group inside before starting the fight. Once the fight starts, the path leading in will be sealed with a force field. Some tames may get teleported in, others will not (if left outside).

Once the battle with the Dinopithecus King starts, he will jump down from his cliff to attack and call swarms of Dinopithecus to aid him - some of which either riding Amargasaurus or lifted in the air by Sinomacrops. On occasion, the boss will leap up to the top of the surrounding cliffs to barrage the players and tames with Infested Grenades. Eventually, he will jump back to the ground with a slamming attack. Similarly to the Dragon, the Dinopithecus King also has a bite attack that will slowly drain 20% of any dino's health hit by it.

Whatever way you plan to approach the fight, it is very important to know that you must be careful of where you are positioned in the arena while the Dinopithecus King is perched atop one of the surrounding cliffs. If you happen to be in the spot where the king decides to jump back down to, you are at high risk of being dismounted from his slamming attack, putting you in an easy spot for him to finish you off with a following attack. If you are accompanied by other players, make sure to communicate to each other where he is landing to prevent this. If you are fighting solo, an agile mount to help you avoid the king such as your own Dinopithecus or a mount that prevents dismounts entirely like a Stegosaurus are good choices.

With the Dinopithecus King's ability to inflict a percentage-based damage over time effect to your tames, it is advised to take it down as quickly as possible. Sending in an army of strong dinos such as Rex on the boss is a great way to damage him. Make sure to take advantage of the periods where he is vulnerable, as failure to do so can result in a very long battle. If the boss is on top of the cliffs throwing grenades, allow your tames to deal with the swarms of Dinopithecus and Amargasaurus before he jumps back down. Bringing a high quality ranged weapon like a Pump-Action Shotgun can be good for killing off Sinomacrops or damaging the boss while he is above you.

The Dinopithecus that will rush in to protect their king can easily overwhelm your group and can also throw feces at your tames, inflicting a 10 second slow debuff. Dinopithecus that are being carried in the air by Sinomacrops will pelt you with rocks and grenades that can damage riders directly. Amargasaurus carrying Dinopithecus can utilize their spikes to lay traps on the field which can either reduce armor quality, burn, or freeze your dinos.

The Dinopithecus King himself will utilize the Amargasaurus spikes on his arms to inflict similar debuffs to your dinos as described above, as well as inflict a 20% health drain with his bite attack. His slamming attack can also dismount you from your tame, potentially making for an easy kill if he hits you with one of his following melee attacks.

Every enemy creature during the boss fight gets reduced damage taken.

Luring the Dinopithecus King into one of the caves near the entrance of the arena can be very beneficial as it will block him from jumping to the top of the cliffs around the middle of the arena.

The large Infested Grenades the Dinopithecus King will throw do great damage, but can be destroyed similarly to the floating orbs in the Rockwell fight with a ranged weapon like a Fabricated Sniper Rifle.