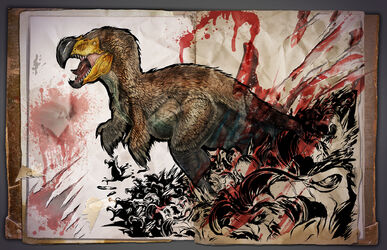 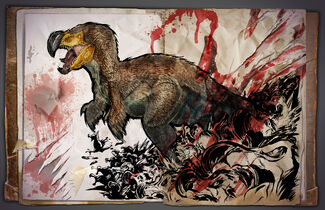 1 Only during Turkey Trial

None
Drag Weight
1000
Immobilized By

The DodoRex is a fan-made creature that has been implemented as part of the ARK: Fear Evolved event. It also appears during various other events, and as a summoned creature in missions within Genesis: Part 2.

At first glance, it has the body structure of a large, feathered Tyrannosaurus with the head of a Dodo. Its body is mostly covered in brown and dark brown feathers that are slightly rusted in gold in some areas. The head, the front of the neck, the underbelly, the lower area of the legs, and the tail are completely bald. The front of the neck and the underbelly are a dark shade of beige with rust-like, dark texturing while the bald area of the legs and tail are bluish grey with small, rust-like areas of beige. All bald areas have visible fissures, but the tail and very lower part of the underbelly exclusively have neon blue stripes. The arms represent the modern reconstruction of Dromaeosaurs with feathers making the shape of small bird wings, except there is only one visible finger on each hand. The head is Tyrannosaurus-like in shape and is mostly dandelion yellow with bulged, dodo-like beak parts at the front that are colored black while slightly rusted with pale brown. Small growths appear on top of the tip of the beak.

The mouth contains sixteen fangs on the lower jaw and eighteen fangs on the upper jaw. There also appears to be no lips to cover the fangs. The two back fangs of the upper jaw are just behind where the modioli terminate. The upper jaw also has visible skull indents made by the orbit, the antorbital fenestrae, and two unknown fenestrae above, leaving a darker shade of dandelion yellow on all but the orbit indents. The back of the lower jaw appears to have small bumps. The eyes are tiny and yellowish orange with black pupils. Above the orbits are extended brows similar to that of a Carnotaurus, but terminate in osteoderms. The feet are Theropod-like with scaled plating on the top and front. The scaled plating terminates under the knees. Each claw is peach-like white with rust-like, grey texturing.

The DodoRex always spawns with the same color scheme and has no color regions.

This means it is currently impossible to make alterations to the DodoRex's colors.

The fire-breath attack yields up to 2000 damage (probably depending on the number of flames the target is covered with) and is applied over the duration of 10s. The flame-damage is not affected by the Melee Damage-Stat and thus cannot be increased by level-ups.

This section describes how to fight against the DodoRex.

Even though the DodoRex is an event only creature, its existence should not be taken lightly, it can destroy metal structures and take on hordes of high-level dinosaurs. If another tribe summons it to take on your base, pull all of your forces together and target the DodoRex before anything else. Be warned that if a tribe is dedicated enough to summon one of these creatures on you, (a very costly endeavor in itself) they likely hold some kind of grudge against you.

A good strategy to kill a Dodorex is to lure it into the ocean where it can't use its fire. You can then attack with some

Plesiosaur from behind, or use a

Basilosaurus. You can also have one

Quetzal with a few platform saddles or an

Argentavis, use a Grappling Hook on the Argentavis (Or stand on the saddle, in the case of the Quetzal), and fire at it from above. Make sure this is done away from the ocean, so its fire breath cannot reach you.

Managarmrs can also be used to briefly stun the Dodorex as well as deal large amounts of damage, while

Wyverns can use their special attacks to heavily injure it.

On Genesis Part 2 a Dragon (summoned tamed for 5 minutes in the red micro-obelisk for 10000 gauntlet marks) can instantly kill zomdodos, fly around the DodoRex and spit fireballs.

If taken to the water, use dinos with powerful attacks like the

Basilosaurus. Avoid using faster water mounts, as speed and circling around the Dodorex will only waste stamina and get your tame killed. The best dino choices here would be a damage-focused Basilosaurus with a mate boost and possible

Yutyrannus on a raft. If faced on land, use Managarmr to freeze the beast, while

Spinosaurus and other attackers can focus it down. Wyverns are able to deal an immense amount of damage, but be careful with AI special attacks as they may deal friendly fire. Not the case for Tropical Crystal Wyverns however!

With the addition of the the Tek Phase Pistol it is possible for several players with the use of the Tek Chestpiece or a flyer and grapples to hover around and quickly melt the health with limited risk of falling victim to the Dodorex. If this strategy is to be used be sure to bring enough Element and several phase pistols if you do not have access to a high quality one.

The DodoRex has two attacks: melee and fire-breath. Both of these can easily kill an unprepared player. Keep a safe distance if you encounter one, and it won't be able to damage you. Try standing on a Quetzal platform saddle and shooting from above if you are having trouble with the aforementioned strategies.

The DodoRex can easily kill any tamed creature or player quickly unless attacking from range. However, the Dodorex is weakened in water and can be bled out by

Deinonychus. A combination of the Deinonychus' bleed and any one another can stack to create damage that can shred the DodoRex in seconds.

Ever since the recent patch, DodoRex is now immune to bleed, so the bleeding strategy no longer works.

Multiple small creatures that have a relatively high damage such as Dire wolfs, and mantis with swords can help deal more damage. A high number of them can add up to result in high DPS against the DodoRex.

The DodoRex also spawns at a set level, and thus the Basilosaurus strategy will always work no matter the difficulty.