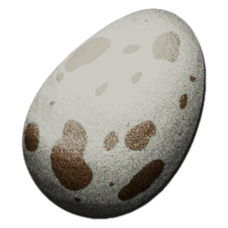 The Dodo Egg is one of the Eggs in ARK: Survival Evolved.

Dodo Eggs are randomly dropped by

Dodos. They can be eaten or used to make

Dodos mate, the resulting egg can be hatched into a baby

Dodo needs between 18h and 2d before having the capacity to lay eggs again. The incubation time can be reduced by up to 20% if the egg is placed in an

Dodo Eggs are among the simplest eggs to collect. The Dodos are simply too stupid to protect their eggs, so they will not be angered when you take them.

A player has multiple options when stealing a Dodo Egg. With a few spears, a player can quickly kill even a flock of Dodos. If the thief cannot be bothered with such a trivial skirmish, then they can simply flee from the Dodos as well. Any form of transport works in this situation, aquatic and aerial mounts can escape from a provoked Dodo with ease, and most, if not all, land mounts can outrun or kill a dodo. Even a player on foot with a decent path of escape can outrun a flock of enraged Dodos. The player can also tame the angry dodo by simply punching it a few times.

Herbivore Pheromone applied has laid one. They will hatch quicker than normal Dodo Eggs and the baby

Dodo will have better stats when it has hatched.

Super Kibble (Dodo Egg), which will