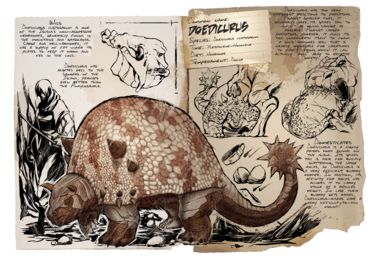 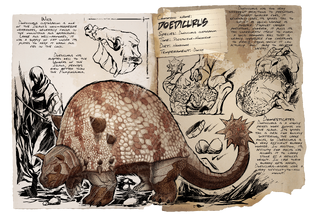 The Doedicurus (Dee-di-KOOR-uhs[1]), also known as the Doed or Doedic, is one of the Mammals in ARK: Survival Evolved. The Doedicurus is a valuable work animal and is excellent at gathering

Doedicurus custosaxum is one of the Island's non-aggressive herbivores, generally found in the mountains and grasslands. Large and well-armored, it has a supply of fat under its plates to keep it warm and fed in the cold. Doedicurus has adapted well to the dangers of the Island, perhaps even better than the Ankylosaurus. Doedicurus has two very different reactions to predators. Against smaller foes, it generally uses its spiked tail to inflict as much damage as possible. Against larger predators, however, it pulls its tail underneath itself to form a solid armored ball that is nearly impossible for creatures to pierce, from which it can actually "roll" away to relative safety!

Doedicurus is a highly prized work animal on the island. Its spiked tail is ideal for quickly shattering the large rocks, so Doedicurus is a very efficient quarry worker. In addition, its affinity for rocks has allowed it to carry stone at a reduced weight. In case their quarry gets raided, Doedicurus-riders have a very difficult-to-kill mount!

Doedicurus is a defensive creature that will attack when provoked. After taking a significant amount of damage they will roll into a protected shell, which reduces the damage they receive significantly. They uncurl after regenerating enough health to feel safe, and there is the possibility for a player to find themselves being chased by a vengeful Doedicurus unless they can get out of the creature's territory quick enough or simply make it lose interest.

A Doedicurus will only roll into a protected shell once it has lost 2/3 of its health.[2]

Once tamed, the Doedicurus can curl up into a ball while being ridden and roll forward. When set to wander, the Doedicurus will autonomously gather stone from nearby rocks until it reaches 50% weight.

Similar to an armadillo in appearance, the size of the Doedicurus is fairly small, being about 3–4 meters long and 1–2 meters high. But this size should not hinder its capability in battle, due to its thick outer shell and spike covered, club-like tail, the Doedicurus can be a tough target for even the larger animals on the island. Similar to the

Ankylosaurus for protection, it is one of the most armored animals on the island, being able to keep itself safe from packs of

Sabertooths. A blue coloration exists, but it is rare.

This section displays the Doedicurus's natural colors and regions. For demonstration, the regions below are colored red over an albino Doedicurus. The colored squares shown underneath each region's description are the colors that the Doedicurus will randomly spawn with to provide an overall range of its natural color scheme. Hover your cursor over a color to display its name and ID.

Type in values of a wild creature to see on which stats it's emphasized. Green values on a high-level creature are very good for breeding. If you have already tamed your creature you can try to recover the breeding stats with an external tool.[3]

Doedicurus prefer any of the

Rockarrot) over berries when being tamed. These crops are all equally preferred, so any one will do. If no advanced crops are available, the creature prefers

Mejoberries over other berries. Doedicurus take a very long amount of time to tame with Mejo or normal

Berries, so try to invest in Regular kibble if possible.

Due to their high torpor stat, Doedicurus are hard to knock out and can withstand a large number of Tranquilizer Arrows. They take 90% reduced torpor and damage when they are curled up in their protective shell and not moving. Using a

Tranquilizer Darts will knock it down with little risk of the Doedicurus curling up, making for an easy tame. A viable knockout strategy involves backpedalling away from the Doedicurus while continuing to unleash your tranq method.

Longneck Rifle and can only use a bow or crossbow, simply back peddle as you fire arrows at the Doedicurus' head. Once it curls up, stop firing and wait for it to uncurl. The torpor will go down slightly but not enough to make it impossible to knock out. Just wait for the uncurl and repeat.

Beelzebufo has some advantages if the creature is alone. One, you can save your valuable arrows and darts for more difficult targets. Two, you can lick it before it hits you and simply jump over its horizontal tail swing like a jump-rope, even landing behind it, just make sure you don't land within range of another attack. Using the basically infinite torpor-inducing attacks of the Beelzebufo, you can afford to keep hitting it after it curls up when your tranqs would be mostly wasted.

When you see a lot of blood on the Doedicurus, you should start only using the primary attack as it does less damage so you won't kill it. Let the poison work by only licking your target once every 10 seconds or so, as the poison effect only stacks twice.

Use the alternate attack of the Equus to kick backwards into the Doedicurus, then dart forwards to avoid the tail swipe. The Doedicurus will follow until it starts to feel the torpor, when it will run away. Gallop in front of it and kick it repeatedly. If the Equus runs out of stamina, run a short distance away to recover. If the Doedi curls into a ball, the Equus can continue to kick; be mindful of blood as with the frog above. This works particularly well on Ragnarok where Doedis and Equus spawn in close proximity.

This section describes how to fight against the Doedicurus.

Since Doedicurus have the ability to curl up into an armored ball, hunting it is not very lucrative at lower levels. It provides a good amount of

Keratin once killed, so at higher levels it is more rewarding.

Using tranq darts before attacking can render low and medium level Doedicurus unconscious rather easily, and once unconscious the kill is easy. Another strategy is to move in, attack, and run away until it uncurls. This can be time-consuming, however, and is not advised. Another strategy is if near a body of water aggro it and kite it into it into the water. Once in the water, if you can get it to curl up in a ball it will drown itself.

Pike proves near useless once the Doedicurus has curled into its protective shell, so most weapons are ineffective. Using a

Oil Jar seems to be the most effective way of killing it, as Fire Damage will not be nullified completely. If not able to access an

Oil Jar Tranquilizers such as

Tranq Darts will work as well as an unconscious Doedicurus cannot roll into a ball.

They don't roll into a ball because of torpor. Tranq them will only cause them to flee just like other creatures.

Almost all Doedicurus curl into a ball directly after an attack, but rarely they have been seen to attack. Their spiked tails pack quite a punch, and an angry Doedicurus is not to be trifled with in close combat.

Tranquilizing and then killing a Doedicurus is most definitely the quickest and most effective means of defeating it.

It will also drown if it curls in the water since it will sink below the surface and stay enrolled till it suffocates.

Doedicurus will curl up when its health drops below 1/3 of its max. They will ignore follow commands while curled up; riding a Doedicurus is the only way to overrule its desire to hide.

When curled up, they take 90% reduced torpor and damage[citation needed] and will not move. Turrets will NOT stop shooting at a Doedicurus if it is curled up.

While riding a Doedicurus, Press 'Alt Fire' Rmb to roll instead of run. When you are rolling, you are unable to toggle running. You are still able to turn. Rolling depletes stamina.

to roll on Xbox.

The Doedicurus gathers stone autonomously while on wander or if left parked next to a suitable rock. It also has this ability while being carried, allowing for a safer and more mobile method of resource collection. It is recommended that an Argentavis be used for their superior mobility and carrying capacity.

In Scorched Earth, a Doedicurus is useful to gather a lot of

The Doedicurus can also gather

Obsidian from the shiny black obsidian rocks. However, there are two types of these rocks that you can't distinguish visually, one will give obsidian the other will not. Mostly you will find the second.

The Doedicurus reduces the weight of the following resources by the listed amount while they are in its inventory:

For information pertaining specifically to the real-world Doedicurus, see the relevant Wikipedia article.