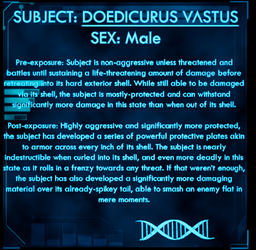 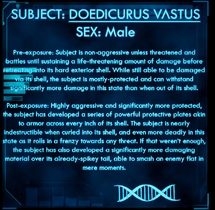 The Doedicurus Vastus is one of the bosses in ARK: Survival Evolved Mobile.

The Doedicurus Vastus always spawns with the same color scheme and has no color regions.

This means it is currently impossible to make alterations to the Doedicurus Vastus's colors.

This section describes how to fight against the Doedicurus Vastus.

Fighting the Vastus is all about hitting key weak points and dodging its roll attack.