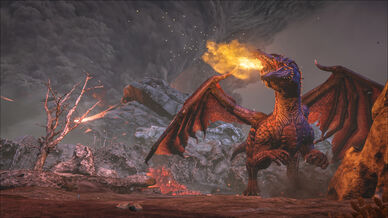 The Dragon Arena, also known as Nerva Volcano is an arena for fighting the

The Dragon Arena itself is located beneath the red obelisk (in single player, if you use the 'GHOST' command and float up, it will actually put you below the green obelisk), but the portal to the arena can be opened from any obelisk or Supply Crate unless playing in Single Player mode, in which case the portal can only be generated at the red obelisk.

The temperatures can be up to 113 °F/45 °C so bring good Hyperthermal protection.