This article is about Drone Bee (Primitive Plus), not to be confused with 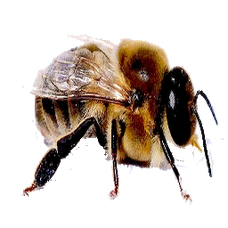 The Drone Bee is a Resource in the Primitive+-DLC of ARK: Survival Evolved.

The Drone Bee can be rarely gathered by harvesting berry bushes. Creatures like the Bronto, Trike, or other large herbivores which can harvest many bushes quickly can make finding bees easier.

If there is at least 1 Queen Bee and 1 Drone Bee in the Apiary, 20 Worker Bees and 14 Drone Bees will be produced every 2 minutes. These worker bees can then produce Beeswax and Honey.