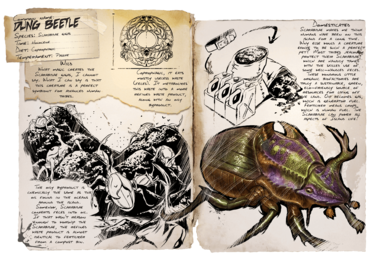 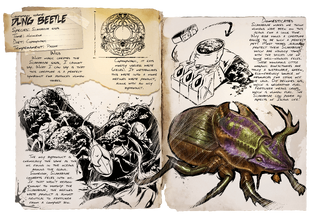 The Dung Beetle is one of the Creatures in ARK: Survival Evolved.

What magic created the Scarabidae gigas, I cannot say. What I can say is that this creature is a perfect symbiont for advanced human tribes. Coprophagic, it eats mostly useless waste (feces). It metabolizes this waste into a more refined waste product, along with an oily byproduct. The oily byproduct is chemically the same as the oil found in the oceans around the island. Somehow, Scarabidae converts feces into oil. If that wasn't reason enough to worship the Scarabidae, the refined waste product is almost identical to fertilizer from a compost bin.

Scarabidae makes me think humans have been on the island for a long time. Why else would a creature evolve to be such a perfect pet? Most tribes jealously protect their Scarabidae, whom are handily tamed with the skilled use of some well-handled feces. These wondrous little organic biofactories are truly a sustainable, green, eco-friendly source of resources for living off the land. Oil becomes gas, which is generator fuel. Fertilizer means crops, which is human fuel. The Scarabidae can power all aspects of island life!

The Scarabidae gigas is a passive creature. It will spend its days happily roaming the island's many caves or the volcanic area of Ragnarok or the hot sands of scorched earth.

A dung beetle of enormous size, Scarabidae gigas is a vital component of the island's strange ecology. They are most often found in the deep caves, feeding on massive quantities of bat guano and, in turn, being hunted by other giant invertebrates that prowl the dark passages and walls. What dung they don't eat is buried in the soil, fertilizing it and ensuring the regrowth of plants. By means not fully understood, their digestive tracts can convert animal waste into both an oil-like substance and a type of fertilizer.

This section displays the Dung Beetle's natural colors and regions. For demonstration, the regions below are colored red over an albino Dung Beetle. The colored squares shown underneath each region's description are the colors that the Dung Beetle will randomly spawn with to provide an overall range of its natural color scheme. Hover your cursor over a color to display its name and ID.

Dung Beetles are found in caves and tamed non-violently. They also can be lifted by an Argentavis or Quetzal.

When choosing a target keep in mind that the level of the Dung Beetle is almost irrelevant as a level 1 Dung Beetle will produce entirely the same results as a level 200 Dung Beetle. The only difference is the weight they can carry, which translates to the amount of Feces you can load on it.

While it is possible to tame anywhere, these beetles appear most frequently near water sources (past the first cluster of snakes in Central cave for example) it is advised to draw them closer to the cave entrance for safety. Positioning your Sabertooth at a choke point to prevent other players from interfering with your tame is advised on PvP. When not aggravated, the beetle will remain stationary making it easy to tame. Time lost by aggravating the beetle varies up to 3 to 5 minutes, which is added to the feeding interval time. After Taming it can be carried out of the cave, just keep in mind that you cannot hold a weapon while doing so.

Bug Repellant appears to have no effect.

Alternatively, you can lure it outside of the cave and pick it up with an Argentavis or Quetzal and relocate it to a taming pen near or at your base for easy taming. That way, you'll know where it is and it will be protected from (most) other creatures during the taming process.

You can safely drag one out of the water area in the North East Cave with the use of a Grappling Hook.

On The Center, Dung Beetles can occasionally be found at the bottom of the entry pit of the LavaCave, meaning a player can fly down with a suitable mount and be out with the beetle in seconds. It can then easily be dropped anywhere the player likes to tame.

This section describes how to fight against the Dung Beetle.

The Dung Beetle is not a dangerous animal, but one should always consider that it is not defenseless! Just be attentive to your surroundings as there are other creatures far more dangerous where the dung beetle resides.

To tame, slowly approach the dung beetle from behind and stand right next to it and start feeding it feces. Once fed, just go into your inventory and keep getting feces. It should not get aggressive. A Phiomia poop farm is recommended or have some large feces ready when you plan on going for one. If taming in a cave, be sure the area is clear of other more dangerous creatures that might disturb your tame before starting. After taming, you can pick it up and carry it. You can fly or ride other dinosaurs while carrying it, but cannot carry the Dung Beetle while a tamed creature is on your shoulder.

For killing, any weapon will do, as they are relatively weak and fragile. Ranged weapons are not practical, as even a stone pick can kill one quickly.

Any weapon will do, but ranged weapons are not practical. But to be more efficient time-wise and not to be surprised by an Onyc or Pulmonoscorpius that could potentially sneak up on you it is recommended to use a pike or sword.

Beware other animals in the cave. A big fight can usually rile up all of the cave's inhabitants, including the beetle. While the player may be swinging away with a pike at nearby Onyc, a beetle can attack, possibly leading to death on either hand. Beware, as the beetle does a surprising amount of knock-back. Stay away from the lava or spike pits in caves that contain them, as to avoid an embarrassing and untimely death via a disgruntled Dung Beetle.

The dung beetles weakness lies in its frailty and is not a practical fighter because of its speed, attack damage, and health; this creature is not really meant for battling, it is prized more for its fertilizer and good looks. On PVP servers, make sure to keep them well protected, as they can be killed in a raid quickly.

The Dung Beetle can convert feces placed in its inventory into Fertilizer and Oil. 'Wandering' must be enabled for conversion to occur so be sure to place the beetle within a pen where it can wander freely without fear of it escaping. It will not collect feces; these have to be placed manually in the bug. Due to the low starting Weight, it is recommended to level up this stat in order to place more feces in its inventory, and due to low health, it is advisable to house these in an enclosed or otherwise protected area. 2 high wooden railings is sufficient to prevent escape.

It is also possible to keep your Beetle on wander in a Wooden Cage and feed it through the closed door. Just aim for the head and access the inventory.

does not get converted into Fertilizer and oil, although they will not spoil when stored in a Dung Beetle either, making them great containers for fertilizer.

Level weight exclusively, no other stat has any effect on the Fertilizer production.

In some cases, they might refuse to wander when on ceilings and certain other structures. This can be fixed by bringing them down to ground level. Dung Beetles do not seem to stop producing

Fertilizer when kept in a

Wooden Cage, even if they are encumbered with