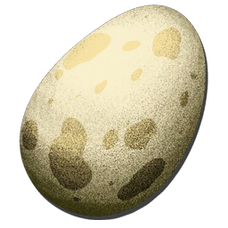 Eggs are dropped by certain creatures and can be found anywhere they decide to drop one. Currently, they can be used as a food source (players can consume them for large amounts of nourishment), for creating Kibble (a useful item for fast and effective taming), and for hatching (to raise baby creatures; fertilized eggs only).

The ability to hatch fertilized eggs was added in v219.0 through breeding. To mate creatures, you must have a tamed male and female of the same species. They have to be near each and both have to be set on wander or set to mating, not overloaded, not following and not mounted (for mountable dino). A mating bar will appear, and once finished, the female will lay a fertilized egg (differentiated by a red cloud surrounding the egg). Not all creatures can be bred. It is also notable that the creatures have to stay close and the wandering mechanic might drive them apart.

The only exception to fertilized eggs would be the

Magmasaur, none of which can be tamed in the wild and their fertile eggs must be obtained from the wild nest.

Said eggs spawned in with commands will disappear as soon as they are dropped, and thus can not be hatched. This is due to the egg having little to no health on the command-spawned egg; if it is dropped in an area where it can incubate and the health does not deplete, it can hatch. Any creatures hatched in this manner will always be level 1 due to absence of Maternal and Paternal details.

Eggs all have different colors and sizes while out of the players inventory, and each have a different weight, too. While they are great for kibble production and human consumption, they offer no nutrition to tamed dinos, (except for the Oviraptor, Titanoboa and Basilisk).

Some dinosaurs will seek you out if you have an egg of their species in your inventory. Any species of herbivore will become aggressive if players pickup an egg from the ground nearby them (except for Dodos, Moschops, and Parasaurs) but simply carrying an egg won't. The Oviraptor has the ability to take eggs without creatures noticing.

Farming eggs efficiently can be very useful to obtain more eggs in a shorter amount of time. Both wild creatures and tamed creatures can be used to build creature farms for eggs.

Only female dinosaurs can lay eggs. Every creature which is capable of laying an egg has exactly the same laying rate (except for Dodos). Currently female dinos will drop eggs continuously if they're mate boosted, no matter if the player is around or not, as long as they are not in stasis - in which there is a 1% chance for an egg to be laid when the creature comes out of the state.

One male can mate boost multiple females of the same species around him, and vice versa.

Eggs can also be obtained from wild creatures. Oviraptors can be used to steal eggs from wild or enemy dinos. Whistling "attack my target" on an egg will cause the Oviraptor to pick it up and bring it back to you.

Mate-Boosted females in the wild that are capable of laying eggs in the wild may drop them, where the egg sits on the ground nearby. These eggs are not fertilized, and cannot be used to hatch a creature. They can, however, be used for kibble and thus are extremely valuable.

If a player approaches and takes the egg into his/her inventory, the animals the egg belongs to (for example: all Trikes if Trike Egg, all Raptors if Raptor Egg) nearby will anger and attack. An Oviraptor can be used to rob the eggs for the player, but then the creature is exposed to the danger of marauding parents. Make sure you can handle the power of the parents if you plan on stealing their eggs!

Pheromone applied has laid one. They hatch quicker than normal eggs and the baby creature will have better stats when it has hatched.

Super Kibble, which will