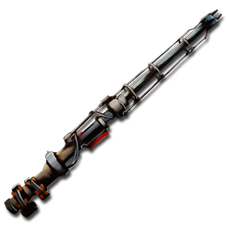 The Electric Prod is a weapon in ARK: Survival Evolved useful for stunning humans and creatures.

Torpor. It can instantly knock out smaller creatures and humans who aren't wearing Riot Armor.

The Electric Prod can only deal one hit at a time. After hitting a target with the Prod, it will break. To make it function again, it needs to be refilled with 8