This article is about Element Dust, not to be confused with 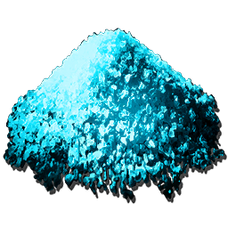 The Element Dust is a resource in ARK: Survival Evolved.

Element Dust can be gathered by killing and harvesting Enforcers, Tek Creatures and Defense Units, by harvesting Lampposts, Benches and Tables in the Sanctuary, or randomly obtained in small quantity by picking up

Ferox and throw it down if it sniffs upon picking up. A Doedicurus can harvest Element Dust from Sanctuary's objects such as lamp posts extremely efficiently, automatically destroying and gathering them as it does with stone; carrying one with an Argentavis or Quetzal and letting it hit lamp posts as you fly through the city can be an extremely fast way of gathering large quantities of Element Dust,

Another way of getting large amounts of Element Dust,

Element, is by finding and defending the Element Nodes spawned around the Wasteland. Element Dust can then be crafted at a City Terminal by breaking down (at an 80% loss) Element and its shards into 200 and 2 dust each, respectively.

Rarely, some Gachas can even produce a moderate quantity of Element dust from their

Gacha Crystals as a production option.

Element, Element Dust can be transferred, and then used to craft

Unstable Element, provided the survivor had learned its respective engram.

Element Dust is used to craft the following items:

It is also used to power the Scout and act as Enforcer food/energy source.