This article is about Element Shard, not to be confused with 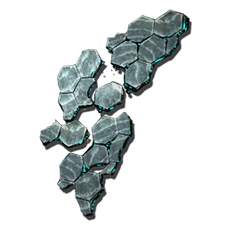 Element Shards are a resource used to power the

Tek Cloning Chamber and the

Tek Light. Also used as fuel for the

Element Shards can be crafted in the

Unstable Element Shard can be unlocked at Level 55, and can be crafted using

Element Dust. Once crafted, there will be a 2 minute spoil timer before Unstable Element Shard turns into regular Element Shard.

Element Shards can be found on Genesis: Part 1 by climbing the slopes of the volcano in the Volcano biome. They are mined from the red crystals which can be found along the trails leading to the top of the volcano. Finding them can be extremely high risk, especially if the volcano erupts while you are up there.

The dormant Carniflora in the corrupted ring, as well as the fleshy flora in Rockwell's Proliferation (Genesis: Part 2), yield a small amount of Element Shards, as well as

Black Pearls and meat. The

Tek Stryder drops them as feces.