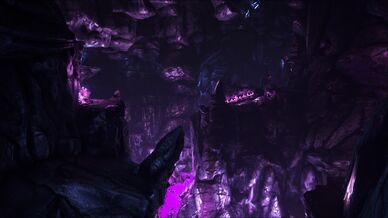 You can bring tamed dinos into this cave as long as they're able to jump approximately 6 foundations high. It is recommended to bring a

Reaper, of which the Rock Drake is the better choice, due to its ability to glide and camouflage.

The entire cave is in the radiation zone, so ensure you are wearing a Hazard Suit.

The easiest and shortest way to the artifact is to use a rock drake to climb to the ceiling of the cave and walk straight across while following the blue crystals.