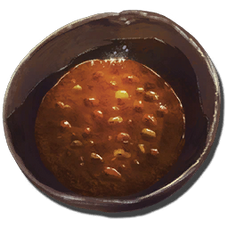 Enduro Stew is a dish in ARK: Survival Evolved. It can be created at a

Consume it to gain a small amount of health regeneration (sic).

The effect lasts 900 seconds (15 minutes). While under effect, you regenerate 1.2 HP each second. Although the description describes improved melee damage, it does not currently offer any increase ingame. It is impossible to eat more than 1 enduro stew at a time, so you can not stack effects to speed up the regeneration.

Canteen with at least 25% water in the

Cooking Pot. Note that if you include a full Canteen, waterskin or water jar it will consume all the water units in it