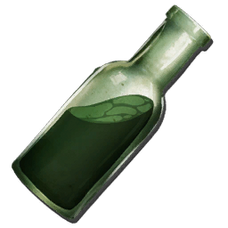 Energy Brew is a tonic in ARK: Survival Evolved. It can be created at a

Consuming this item refills the player's

It can be consumed on-the-run when trying to flee on foot for long distances without the need to stop and rest.

Canteen with at least 25% water in the Cooking Pot, and remove any

Charcoal during the cooking process to avoid the creation of any dyes.

Thatch can also be used as a fuel, as it doesn't create any Charcoal byproducts which could accidentally produce dyes.