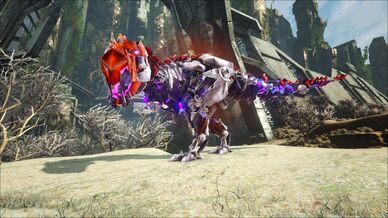 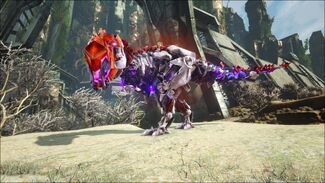 Tek
Habitat
The Enraged Corrupted Rex will rarely spawn during an

The Enraged Corrupted Rex is one of the Enraged Creatures in ARK: Survival Evolved's Extinction expansion.

Much like any other Corrupted Dinosaur, the Enraged Corrupted Rex is extremely aggressive.

Tek Rex, but infused with

Corruption; it also has a distinguishable red aura much like the

Orbital Supply Drops, meaning it will almost always appear with levels around 500. Upon defeating the Enraged Rex, you'll obtain an

Alpha Tyrannosaur Tooth, necessary for the

Alpha King Titan. During the raid, if an Enraged Rex is present, all other

Corrupted Creatures will receive half damage, making it a priority to kill.

Enforcer as they deal four times their normal damage on

Enraged Creatures. Be mindful of the Enforcer's health though, as it does significant damage.

Another method is to use a

Managarmr as its ice breath can be a good method if you want to stay away from the Enraged Corrupted Rex. Just make sure to have other dinosaur nearby to deal against it as it cannot be frozen again for a while.

Fighting on foot is definitely a bad idea, but if necessary, utilize the best shotgun with high damage per shot that is available in the arsenal, along with a fully powered Tek Suit to get far away if it gets too close.

Alpha T-Rex, Enraged Corrupted Rexes can kill most tamed dinos with relative ease and shred through any sort of base. Coupled with the fact that it halves the damage taken to any nearby corrupted/enraged creature makes it a much more dangerous creature to deal with. They are at their most dangerous when several Enraged Corrupted Rexes are different in gender because the 2/3 damage reduction from mate boost and its alpha status halving damage makes tamed creatures deal 1/3 of their normal damage to them.

While Enraged Corrupted Rex in a bundle can become an issue, isolating the Rex away from other corrupts will allow for an easy kill. Just make sure to eliminate corrupted creatures approaching towards it before they get too close.